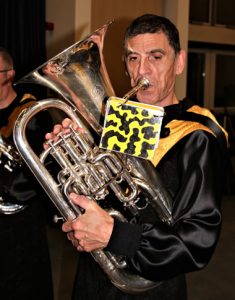 Gugge 2000 was formed in November 1998, by Dave Brewer & other former members of bands from the Bournemouth area.

They were keen to create a type of performing band never before seen in the UK. They wanted to make people listen, tap their feet, dance, join in and create an atmosphere of music and fun for all to enjoy.

Inspired by the Guggenmusik bands they had seen on a trip to Fasnacht carnival in Lucerne and the subsequent visit of Swiss band ‘Qua Quager’, from Triengen, to Bournemouth the group decided that it was Guggenmusik that they would unleash on unsuspecting British audiences!

So, in the midst of an English winter (rain & more rain) Gugge 2000 began to meet on Friday nights, about eight to ten of them at first. The group grew bigger as the word spread, and soon they had to move to larger premises to rehearse (and somewhere where there were no neighbours!!).

Keep watching this space and checkout the ‘News’

Menu
We use cookies, which are small text files, to improve your experience on our website
Ok